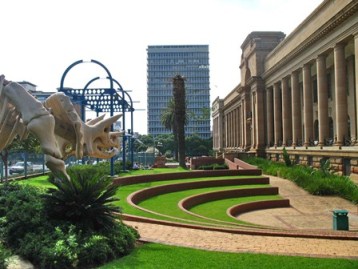 The Transvaal Museum of Natural History was founded in 1892 and was originally buried away in a tiny room next to the clock tower on the top floor of Parliament House, a collection so small, it hardly justified the hiring of any permanent employees.

Today the collection at the Transvaal Museum of Natural History is housed in a magnificent sandstone building, its entrance dominated by dinosaur skeletons, filled with cavernous display halls. Exhibits include hominid fossils from the Cradle of Humankind World Heritage Site and associated fauna, including Mrs Ples one of the country’s top celebs and the nickname attributed to a fossil skull believed to represent a distant relative of all humankind; fossils of amphibians, fish, reptiles and plants from the Karoo.